I am currently making a mirror copy of the site in its current development to put on IPFS with a Name space on IPNS for ongoing updates to the static IPFS web site. Adopting constituencies takes about 2 minutes for each one on my processor speed and connection speed, Getting all constituency pages made will take me 4 days or so which will be spread out over several weeks. As yet no other editors have adopted a constituency although a number of accounts have been made . Why is no one editing? it would be good to know. Anyway as a tool for future use I think the WIKI has potential and I have enjoyed getting it to this stage and I am motivated and enthusiasticall as well to continue. MAde and rss feed for 4 Pamphleters yesterday as part of the web automisation and optimisation suite for Grub Street etc, also have ideas for RSS feed from wiki to twitter or web page etc. https://thefourpamphleteersofgrubstreet.weebly.com/

Notes for set up original[edit source] 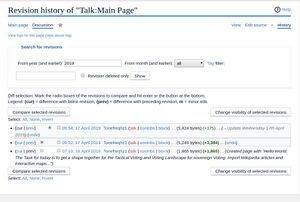 Hello World. The Task for today is to get a shape together for the Tactical Voting and Voting Landscape for sovereign Voting.

https://en.wikipedia.org/wiki/Brexit_withdrawal_agreement The Brexit withdrawal agreement (officially: The draft Agreement on the Withdrawal of the United Kingdom from the European Union) is a proposed agreement between the United Kingdom and the European Union on how to implement Brexit. It covers such matters as money, citizens rights, border arrangements and dispute resolution. It also contains a transition period, and an outline of the future relationship between the UK and the EU. Published on 14 November 2018, it was a result of the Brexit negotiations.

Potential Initial Edits from freinds of the Wiki and founders

I spoke with John Ward at length this morning mainly about Google and Google chrome Search Engine Optimisation strategies and the Deep Strategy behind the Geo-Political aspects of Brexit and EU Military unification. The Trilogy on the Withdrawal agreement extension and on-going C Conservative and Labour talks regarding a compromise to get a Withdrawal Vote through the Commons.

Regarding Target Dates for mobilisation of this Wiki.

.]] Local elections in the United Kingdom are scheduled to be held on Thursday 2 May 2019, contesting 248 English local councils, six directly elected mayors in England, and all 11 local councils in Northern Ireland. A total of 8773 councillors are due to be elected. Additionally, there will be by-elections for 39 local authority seats,[1] taking the total number elected to 8812.

[General Election]. In the run up to the next United Kingdom general election, various organisations are expected to carry out opinion polling to gauge voting intention. Results of such polls are displayed in this article. Most of the polling companies listed are members of the British Polling Council (BPC) and abide by its disclosure rules. Opinion polling about attitudes to the leaders of various political parties can be found in a separate article.

The date range for these opinion polls is from the previous general election, held on 8 June 2017, to the present day. Under the Fixed-term Parliaments Act 2011, the next general election is scheduled to be held no later than 5 May 2022.[1]

Most opinion polls cover only Great Britain, excluding Northern Ireland as its 18 seats are contested by a different set of political parties.

More on our aims and objectives.[edit source]

If you click on the thumbnail that is the screen you will get if you click history in the Top right of the window under the Main Page Title being edited. Options appear for undoing edits or comparing current to previous edits. When sourcing information from Wikipedia articles there is a host of further information to be gleaned quite apart from the consensus page on the Main page article. Part of what this WikiBallot initiative is about is to uncover what is censored from "[the News Fit to Print]" The Web 3 instance is planned to disintermediate the server choke point in any legacy web or Cloud-based server system but we also aim to subvert the Google and Chrome censorship monopoly exercised through its private policing of all the news fit to click. Using an alternative Browser such as Tor or Duckago go is a great first step for personal news feeds uncorrupted by the Corporate Narrative machine, meanwhile spoofing those levers of censorship is also important to share the tactical voting tools and sovereign Personal Destiny Control Direct democratic ethos all the way to restoring our Liberties. - 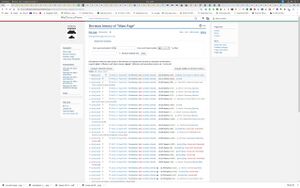 I have had a tidy up today to make the layout of the Wiki more accessible from the Page Summary and to encourage greater participation in the 2021 May 6 Local Elections. But especially the Hartlepool By Election.Tonefreqhz1 (talk) 20:13, 7 April 2021 (BST)

Retrieved from "https://wikitacticalvoting.miraheze.org/w/index.php?title=Talk:Main_Page&oldid=1362"
Cookies help us deliver our services. By using our services, you agree to our use of cookies.