https://en.wikipedia.org/wiki/2019_Peterborough_by-election A by-election took place in the Parliamentary constituency of Peterborough on 6 June 2019.[1] It was won by Lisa Forbes of the Labour Party. Mike Greene of the Brexit Party took second place.[2]

As the Labour candidate, Onasanya was first elected to represent Peterborough in the 2017 general election, defeating Stewart Jackson, the sitting Conservative MP, by 607 votes.

Following a conviction for perverting the course of justice relating to a motoring offence in 2017, which resulted in a custodial sentence, it was announced in January 2019 that she had been expelled from the Labour Party.[3][4] She remained in parliament, where she sat as an independent and continued to protest her innocence.

As a result of her conviction, a recall petition was organised in her constituency. It was signed by 27.6% of the electorate, more than the 10% threshold required; as a result, on 1 May it was announced in the House of Commons that the seat had fallen vacant. This was the second recall petition and the first successful use of the voters' petition procedure to remove a sitting MP, as provided for in the Recall of MPs Act 2015.[5]

The deadline for nominations is 9 May, after which the list of candidates will be publicised. 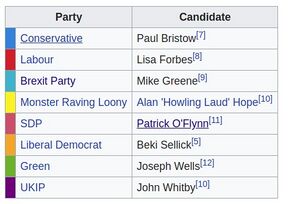 Although not disqualified from seeking to regain her seat, Onasanya will not be fighting the by-election.[13]

Former Labour and Respect Party MP George Galloway stated on Twitter that he intended to stand on a pro-Brexit position.[14][15] Galloway stated that he had approached Brexit party leader Nigel Farage directly about being the Brexit Party candidate, but could stand as an independent if not selected.[16] He was not selected and withdrew his candidacy from the election.

The Liberal Democrat campaign will focus on opposition to Brexit and calling for a second referendum on the matter.[15] In response to a proposal by Change UK, they, the Liberal Democrats and the Green Party are considering a joint anti-Brexit candidate.[17] 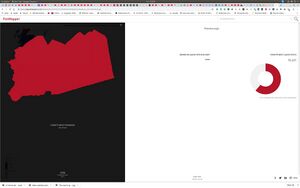 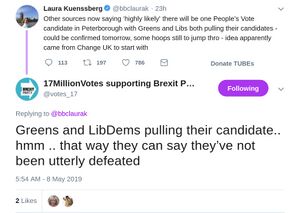 Retrieved from "https://wikitacticalvoting.miraheze.org/w/index.php?title=Peterborough_By_Election_2019&oldid=306"
Cookies help us deliver our services. By using our services, you agree to our use of cookies.